Ex novo – Science behind the scenes: The Art of Science and the American Buffalo

Ex Novo – Science behind the scenes

“Ex Novo – Science behind the scenes” is a series of articles born within ISA’s blog in collaboration with the Collegio Nuovo – Fondazione Sandra e Enea Mattei in Pavia, whose students community is marked by a strong presence of women in science. Science is research, long hours to carry out experiments in the laboratory or in the field, but science is also communication, grant writing, entrepreneurship, administration, teaching, project management, leadership and many other facets. We will post articles, interviews and short stories on these multiple aspects of the scientific endeavour.

The Art of Science and the American Buffalo

When I “migrated” to Canada, two decades ago for graduate school, my “Mamma”, not understanding exactly what I was doing in the middle of no-where, described me as some sort of an educated shepherd, following, observing and recording the animal behavior in a few populations of bighorn sheep and mountain goats. I am a naturalist by trade; I have been fascinated with Nature and animal behavior and communication as long as I can remember. A naturalist? What does a naturalist do? A naturalist is someone addicted to observe and discover the patterns of nature, the links of evolution and the connections existing in the web of life. In a hyper-technological-cyber-micro-nano- 3D-Meta world that continuously evolves at unprecedented speed, a naturalist usually struggles to fit in. Naturalists seek to observe the interconnected relationships between living organisms, their environment, their societies and their genetic blueprints, so we can understand the evolution of the past and the numerous “involutions” of the present of our local and global environments. The observation of Nature is unarguably the oldest, most beautiful, complex and imperfect “science” of them all. I like to think of it as the “Art of Science”, a discipline that existed since the beginning of time and yet we still know so relatively little about it. Think of it for a moment: in February 2021, the Perseverance Rover landed on Mars, a distance that is 384,54 million kilometers away. Human kind has landed a robot on Mars, yet we still have many unanswered questions about the evolution of our own species and we still do not know how to reverse the dramatic changes caused by us on the Planet in the last two centuries. 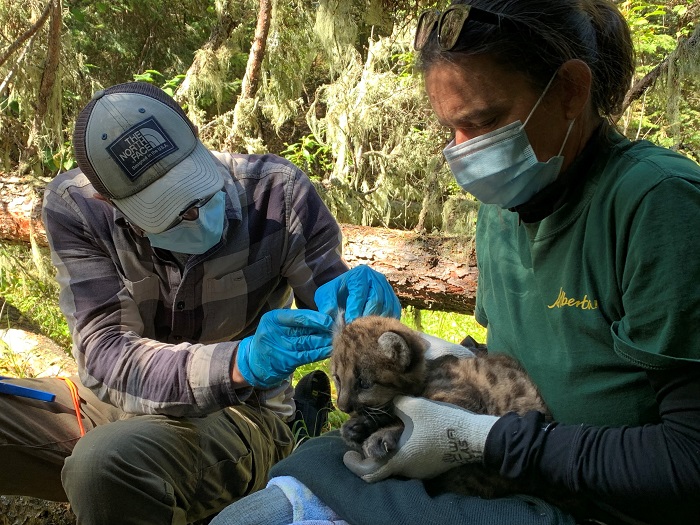 Figure 1. Chiarastella, the naturalist in action.

One of the topics I am most passionate about is the intertwined, conflictual and symbiotic relationship between wildlife and humans. In particular, my interest focuses in integrating the conservation of dangerous or nuisance wildlife in a human-dominated landscape. Unfortunately, in the world of “resource development and extraction”, co-existing and conserving wildlife is a challenge on its own.  If the wildlife is also “dangerous” or potentially destructive, then the challenge grows exponentially. However, little did I know of the silent barriers of human fear, when I was offered a position as a wildlife biologist in Central Alberta in Canada. How could I?

By 2006, I had spent five years living in remote areas where I studied and followed all sort of wild critters: bighorn sheep, wolves, and cougars, black and grizzly bears. I am at ease with wildlife. I treat it with great respect, but I do not grasp the concept of fearing it. I believe the animals sense my lack of fear, because I had the most amazing close-up encounters with “dangerous” wildlife and ended-up in the emergency room only a few times with minor accidents. However, my experience as a biologist was not enough to advocate for co-existence and conservation of dangerous wildlife. One needs to sharpen skills that have little to do with behavioral ecology and grad-school statistics; skills such as psychology, sociology, being open to learn, and an outstanding ability to drink coffee with the most different stakeholders and listen to stories for seemly forever. Fifteen years in the making, and at times, I still wonder if I will ever be able to make an appreciable dent to better wildlife-human coexistence and enhance conservation. 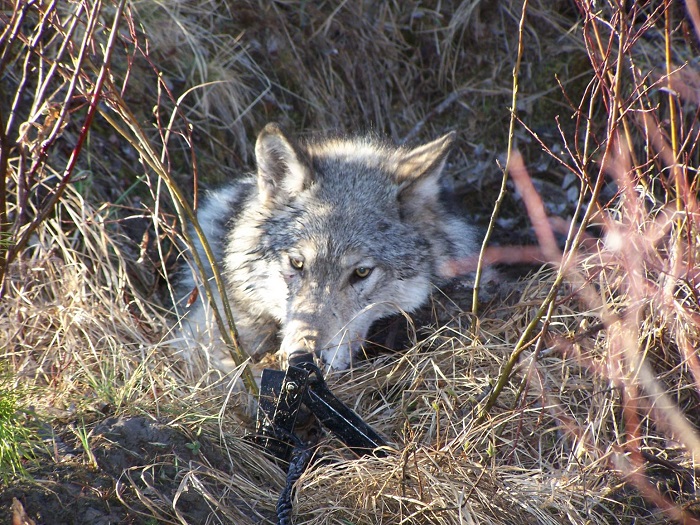 Figure 2. Close shot of a wolf.

Recently, I had the opportunity to get involved with a conservation project promoted by Parks Canada. The ambitious and challenging project aims to bring back the bison to Banff National Park. The bison was a keystone species in North America’s woodland and Great Plains ecosystems, but it has been absent from the landscape for over a century [1]. In 2018, Parks Canada announced the release of 31 bison. For many people the return of the bison in a small part of its original range is a historic, ecological and cultural triumph. A colleague and I got involved because this small population would eventually grow and expand outside the boundaries of the park, possibly becoming a nuisance fast. This is a very exciting and equally challenging opportunity. The bison is a large animal and can become a threat for humans and their resources. Additionally, this animal is a culturally iconic species for the Indigenous Communities, and I wanted to understand better the relationship between the bison and First Nations. What I learnt helped me appreciating this conservation effort to a much deeper level.

When Europeans arrived in North America in the 17th century, approximately 40 million buffalo roamed the continent. The relationship between man and bison is very complex and encompasses the most diverse values, depending on the person you are talking to. For more than 12,000 years, Native people hunted the great herds of bison. During that time, there is no evidence that the numbers of bison were in decline. Still in the 18th century, the bison, more than any other species in the history of humankind, was critical for the survival of the indigenous communities. Perhaps at no other time in human history, had a culture, depended more completely on a single species for so long.

Unfortunately, it all changed when the Europeans arrived, with guns and horses. The resources of North America seemed limitless. The new comers started to kill the bison in unimaginable numbers, for many reasons and for no reason at all. The buffalo were no longer killed so that an ancient culture could survive. Instead, they were shot from passing trains or in contests to see who could bag the most in a single day. They were shot to starve the Indigenous tribes and force them to surrender. Most of all, starting toward the second part of the 18th century, bison were shot for their thick durable hides, which were increasingly in demand in the eastern United States for use as industrial machine belts. The numbers are difficult for me to grasp, even when documented by pictures taken by the end of the 1800s. By 1873, the species was on the brink of extinction and the 10,000 years old culture that depended on it was destroyed irreversibly. The loss of the bison brought devastation to the Indigenous People that were faced with starvation. Their survival meant abandoning an ancient hunting lifestyle, and accepting a sedentary existence, living on reserved land set aside by the Canadian and American governments. In less than 200 years, a population of over 30 million bison was reduced to fewer than 1,000 individuals: one of the greatest slaughter of wildlife in human history.

If not for the actions of a few dedicated individuals, the extinction would have been complete. Today, several 100,000 bison survive in public and private herds across North America. 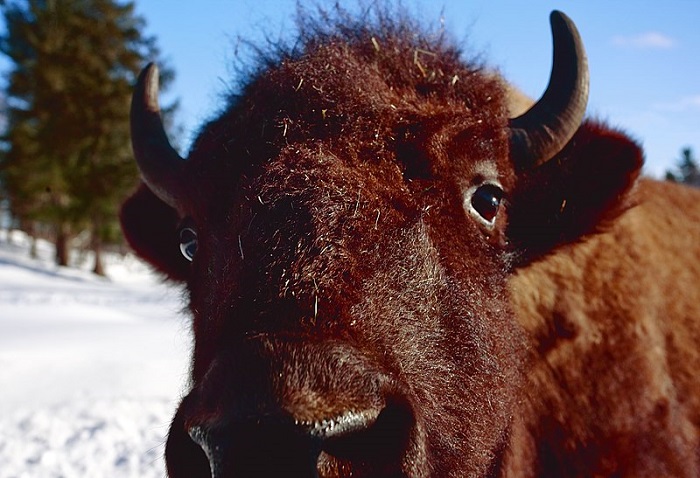 The knowledge acquired gathering information on this project deepened my beliefs that if we want to conserve and maintain dangerous and “inconvenient” wildlife on the landscape, we must learn about that species and shift the paradigm of the relationship, from being a relationship based on fear to one based on knowledge, education and appreciation. The buffalo, a symbol of power and freedom, represents an example of the complex relationship we have with Nature. This species went to be the icon of a continent to be nearly extinct in less than a century and it now survives as a species at risk, a powerful reminder of how much we have to lose before we cease to be responsible stewards of the world around us.

[1] A keystone species is a species that has a disproportionately large effect on its natural environment relative to its abundance and plays a critical role in maintaining the structure of an ecological community (R. Paine 1969). For example, the wolf, the grizzly bear, the beaver and the bison are all keystone species.